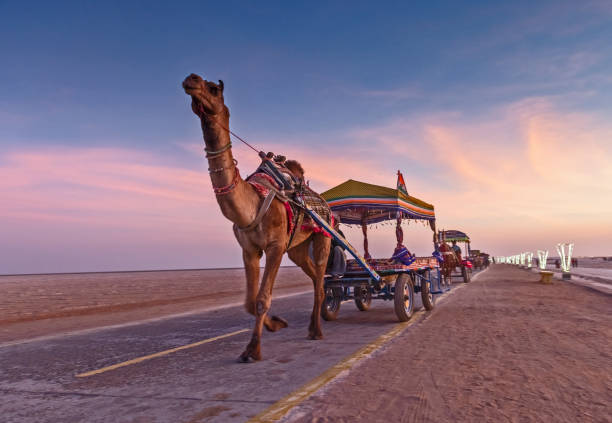 Inland from the shore is the vast, cratered Rann of Kutch, which is guaranteed to leave you speechless. The miles-long expanse of nothingness is both unnerving and beautiful, with little water bodies and shrub forests serving as homes for pink flamingos and wild asses.

The hub for Kutchi needlework, tie-dye, leatherwork, ceramics, bell metal art, and the renowned Rogan painting by the last surviving professional family may be found in tribal hamlets with cylindrical mud bhungas (huts). The 4953-square-kilometer Wild Ass Sanctuary is located in the Little Rann of Kutch, which is located about 200 kilometres east of the Rann. It is home to the last known population of blue-bulls, blackbucks, chinkaras, and the chestnut-colored Indian wild ass (khur).

The region was previously a vast shallow of the Arabian Sea, but a continuous geological movement cut it off from the ocean. The area gradually developed into a seasonal salt marsh desert over time. The marsh overflows with water during the monsoon, and the wetland stretches from the Gulf of Kutch on the west to the Gulf of Cambay on the east. The water evaporates over the summer, leaving behind a crunchy substrate of white, salty land.

Western Gujarat’s Kachchh district contains the salt marshland Rann of Kachchh in the Thar Desert. Between the Pakistani state of Sindh and Gujarat in India is where it is located. Its 30,000 square kilometres of land include the Banni grassland, the Little Rann of Kachchh, and the Great Rann of Kachchh.

The Rann of Kachchh, thought to be the world’s largest salt desert, is well known for its white, salty desert sand. Hindi’s word for desert, “Rann,” is derived from the Sanskrit word “Irina,” which has the same meaning in Hindi. The people of Kachchh are known as Kachchhi, and they speak a language with the same name. The majority of people in Rann of Kachchh are Sikhs, Jains, Muslims, and Hindus.

A variety of biologically diverse fauna, including flamingos and wild asses that are frequently sighted in the desert, make the Rann of Kachchh region home. Rann is also a part of a few sanctuaries, including the Kachchh Desert Wildlife Sanctuary and the Indian Wild Ass Sanctuary. Both nature lovers and photographers of wildlife will find it to be a paradise.

Every year, from December through February, the Gujarati government organises “The Rann Utsav,” a three-month festival. The primary source of income for the inhabitants who warmly welcome tourists from across the world to sample regional specialties and experience Kachchh’s culture and hospitality.

How to Reach Rann Of Kutch:

By Road Rann Of Kutch:

By Train Rann Of Kutch:

Bhuj is the closest air and rail node to Rann of Kutch, at 85 kilometers.

By Air Rann Of Kutch:

The Rudra Mata airport at Bhuj is a small but busy node that connects Mumbai to Bhuj.

Get Know More About: Rann of Kutch Packages